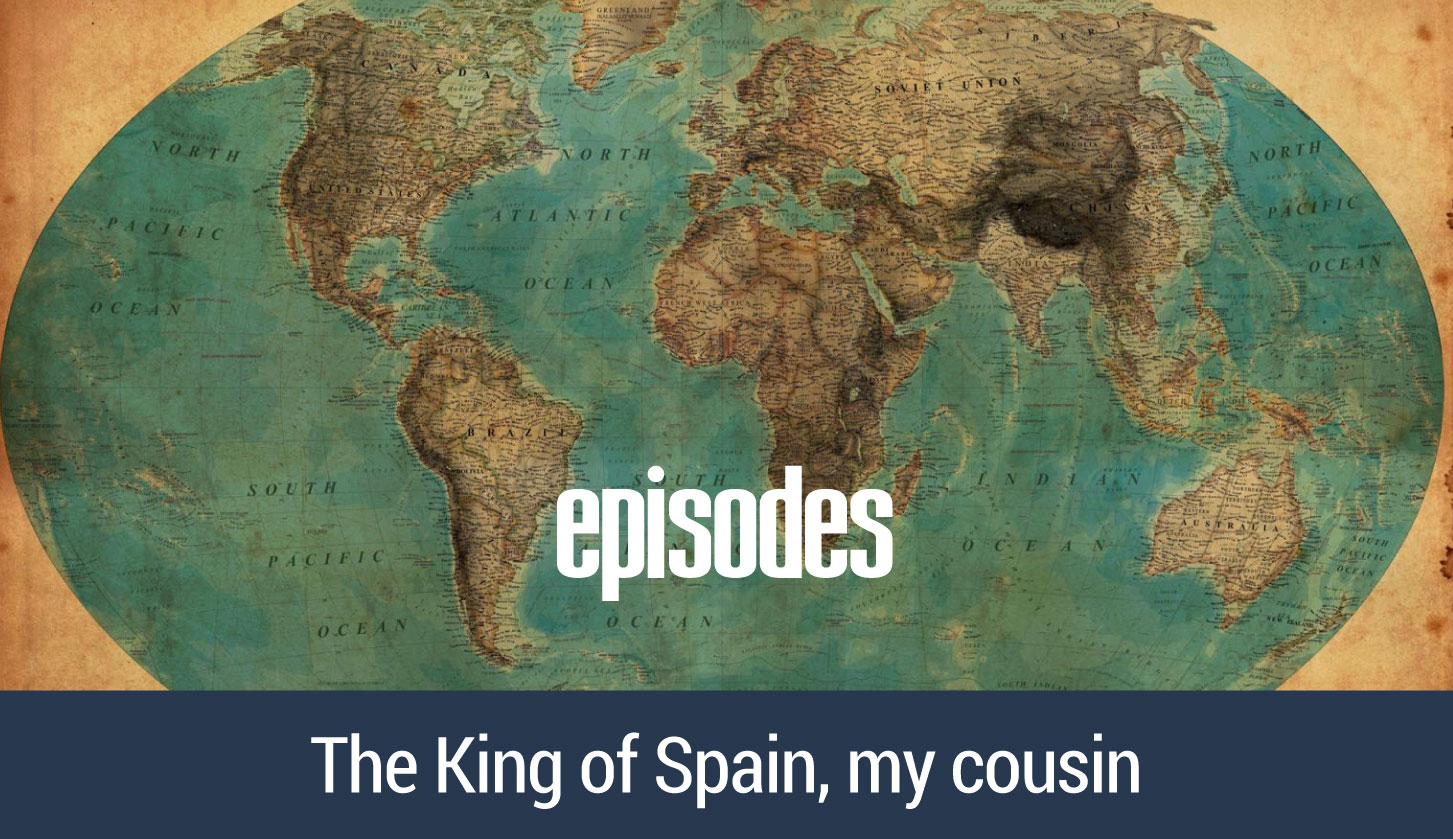 Identity and race in Latin America.

In 2019 we remember 500 years since the beginning of the conquest of America at the hands of the Spanish conquistadores, and the new Mexican government is demanding from Spain today an apology for the events that occurred 500 years ago...

The King of Spain owes me no apology. An apology turns him into a guilty villain and me into an innocent and helpless victim. Neither is he a villain (grrrr), nor am I a helpless victim (aaay!). I have no reason to count Don Juan Carlos de Borbón a villain, and I respect myself too much to accept the role of victim. Victims are weak, timid, defeated and addicted to feeling sorry for themselves: I am not any of those things. What the King of Spain owes me is the same thing that I owe to him: respect, appreciation, solidarity as a pair of individuals that ended up twinned by our blood, history and destiny thanks to the play of forces incalculably greater than him and I, forces that never asked for our approval nor our help. The King of Spain and I are brothers by race, culture and vocation. I did not choose him nor did he choose me, because we don't choose our families: families happen to us. Families nurture, educate and protect us, and that's why family members love each other, support each other, celebrate each other. The King of Spain does not lower himself by embracing me as a brother, nor do I exalt myself beyond my place by embracing him: we are brothers, and that shapes and defines us both.

This game of historical offenses and apologies is a fallacy. Yes, yes, yes: Spain humiliated, exploited and enslaved the indigenous peoples of Mesoamerica 500 years ago... which is the very same thing the Aztecs also did! Ouch! If Spain today must apologize to the Aztecs, the Aztecs would have to apologize to all the peoples of Mesoamerica in their days, and the Mayans to all the peoples of the Yucatan peninsula and Central America, and the Incas to all the communities they subjected and from whom they extracted tribute in Peru and Bolivia ... and so on -where does it end? (Spain in her turn will have to demand an apology from the Arabs, because Spain endured not 300 but 700 years of humiliation, exploitation and slavery at the hands of the Maghrebi sultans).

I am not saying at all that this humiliation, exploitation and slavery were not abominable crimes, because they were and continue to be crimes. But for the mestizo, the mixed-race peoples that we Latin Americans are today to demand apologies from Spain on behalf of the Aztecs, the Mayans, the Incas, the Chibchas or the Guajiros is to fail to understand who they are and who we are. Mexico, for instance, is not the Aztecs, or the Mixtecs or the Mayas, for all the glory and merits of those cultures and the much-deserved love we have for them. Mexico is the Aztecs, the Mixtecs and the Mayas PLUS Spain. My Latin American brothers and sisters, Spain is in our blood, and what a privilege that is! Spain is our violent father, a rapist even. We are the offspring of rape, and rape will always be awful and detestable. But not so us, the offspring of that rape, and if we continue to play the victim it is because we do not yet value and respect ourselves. When we play the victim we perpetuate our humiliation, feeling inferior, degraded, dirty for being bastard children. For being children of rape. No, ladies & gentlemen, we are not bastards, we are princes and princesses, the Offspring of a violent marriage, yes ... but a marriage between a king and a queen: princes forged, begotten in the cauldron of violent conflict, in the volcanic eruption of history. Let's behave like the princes that we are, not as unwanted children belittled by history.

Do you remember the great heroes of classical Greece? They were demigods born of rape, bastard offspring of divine violation. Hercules, Perseus, Dionysus, Minos, Orpheus, Asclepius (the god of medicine!), Helen of Troy-the legendary beauty that launched "a thousand ships into battle" - queen Clytemnestra, wife of the mighty king Agamemnon; Castor and Pollux, the patron saints of sailors... they are all bastard children, the offspring of rape. But this is not how mythology remembers them, but as princes and princesses, as heroes and demigods, as the most exalted among mortals. Let's be like this! Let us stop walking through life humiliated and crestfallen: let's lift up our faces like princes and heroes!

Do you remember Solomon, the legendary King Solomon, the wisest and most powerful man of his day? Well, he too was the offspring of rape when David stole Bathsheba. Did that take away any of the mythical glory and wisdom that Solomon went on to acquire? Not in the least. Let's be like Solomon!

Spain is our violent father, capable like all men - like you and me, and any woman - of committing rape. But Spain is also King David, capable of the most sublime accomplishment in music and poetry, and of glory and extraordinary spiritual and physical victories, a man so exceptional that he earned the trust and the greatest appreciation of God himself, who declares David "a man according to my heart". David is described as "the sweet psalmist of Israel." David raped Bathsheba, and stained his hands even more by killing Uriah, her husband. But David was also the only hero who could kill Goliath the giant, and he was the best warrior, and the best singer, the best general and the best king Israel ever had. God blessed his seed by decreeing that the expected Messiah, the Saviour of the world, would emerge from his offspring. Gentlemen, that's David the rapist. That is Spain. And we are Solomon, her offspring.

"What nonsense you talk, Gabriel Porras! You are crazier than a donkey who has swallowed three bottles of tequila, claiming that it is the most efficient way to eat his greens and keep his vegan diet...!"

We are a mestizo race, a mixture of two bloods, and that makes us special and doubly interesting. Think of extraordinarily talented and attractive people like Rachel Welch, Angelina Jolie, Cameron Diaz, Freddie Mercury, Keanu Reeves, Naomi Campbell, Meghan Markle, Adriana Lima, Dwayne Johnson (The Rock) ... all of them mestizos, a mixture of two or more different bloods. Demanding apologies for what happened 500 years ago is a childish and useless distraction. The Spaniards of today are not those of 500 years ago, nor the Mexicans of today are those of 500 years ago. Hernán Cortés and Francisco Pizarro will not rise from their graves to apologize; neither Cuauhtémoc nor Atahualpa will suddenly make an appearance to receive these apologies. Neither the Spaniards nor the Latin Americans of today had anything to do - as victims or victimizers - with what happened 500 years ago. A more useful way to remember these vertiginous and traumatic events will be working together today, Spanish and Latin American, to create a better present and future together as a family. Because we are family, blood relatives. Linked not only by a common language, culture and character. We are flesh and blood relatives; that's how close we are - genetically linked. Mexico, Latin America: Spanish blood runs through our veins, and Spain's great and beautiful heart beats in our fiestas and our passions, and also in our weaknesses and our greatest dreams.

How I wish that all Latin Americans could travel through Spain, and all Spanish through Latin America, so we could all realize that we are family, and what a beautiful family we are!

I am a Mexican mestizo, as much a Spaniard as an Aztec, and I could not be more proud of both races, because they have produced sublime art and poetry, and vibrant cultures full of colour and passion. Mexico and Spain are the two countries most full of glory, rage, imagination and creativity that I've ever known as I've travelled all over the planet. My passport is a Mexican passport, but my spirit and I are greater than my passport. Nor do I need a Spanish passport to embrace and claim Spain as my family, my mother, and the culture that took me by the hand as a child and taught me how to speak, to feel and to create. The culture that spoke to my heart, held me and created me - she still does, and will do it to my grave. Like Mexico, like my beloved Mexico. I have nothing but love and gratitude for Spain, as for Mexico. As for my parents, even when they were cruel or I did not understand all their decisions. As a mestizo I have the glory and the wealth of having two cradles, two homes, two families. To be mestizo like I am is to be twice, to be born with a double inheritance. Who could ask for more?

Radiant Whispers · The King of Spain, my cousin